I wanted my first CITO event to be something special, and therefore I decided to have it on the water. The idea was to do a canoe tour on the Ljubljanica and make the river a little bit cleaner by »fishing« some trash items out of her. Counting all the beers, soft drinks, and energy bars that we drank and ate on the river I am afraid that this CITO has a negative final balance. Most probably we produced more trash than we collected. I should rather call it a TICO event, Trash In Cache Out. Oh dear!

The good news is that the River of Seven Names is actually a lot cleaner than I had thought. At least on the surface. Spotting the occasional trash item (like a plastic bottle or can) almost felt like finding a well-hidden geocache. From time to time one could hear shouts of joy coming from one of the boats in the distance: »Uh, I think I saw some trash. Let’s turn the boat around!« In the end, more than 20 teams had managed to fill only one big bag. 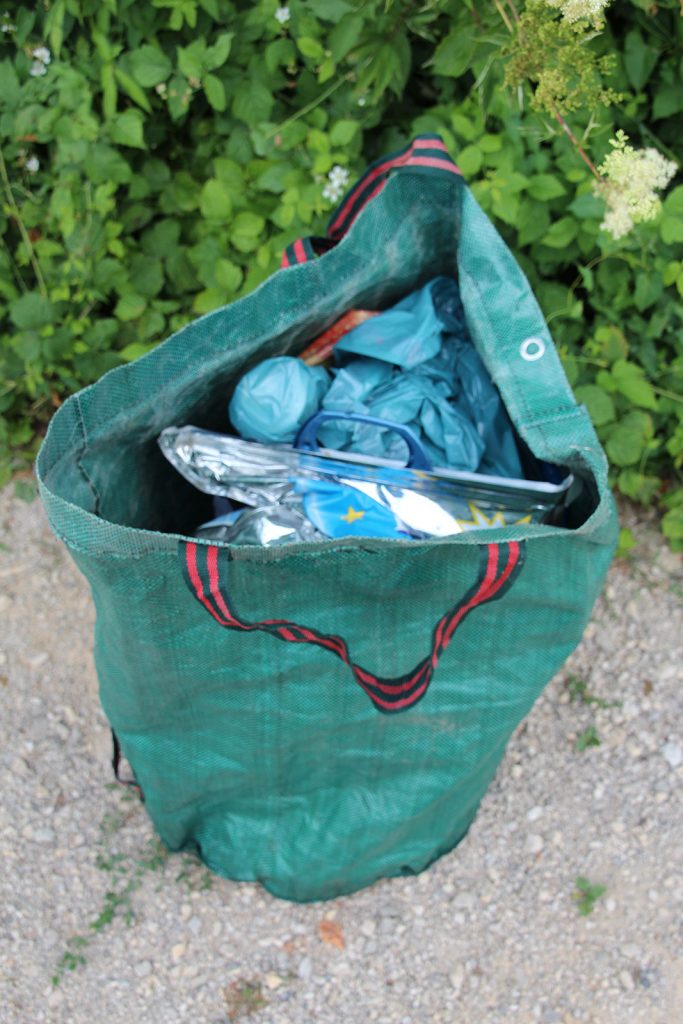 Poor booty of the CITO pirates

But, and that is the unpleasant news, in the heat of summer the water of the Ljubljanica looks kind of dirty and it also smells pretty bad, at least during the first kilometre or so from Livada towards Črna vas (in the area where both shores are still inhabited). Not very inviting and no place where you would want to go for a refreshing swim.

But apart from the low environmental protection effect, I would say that the event was a success. At least socially. After the official part most of the participants decided to join me for a drink (well, more two or three…) in the waterfront restaurant Livada. But also before, on water, the overall atmosphere was very positive and one could hear a lot of laughter. Sharing a boat (and a common goal) seems to have positive effects on teambuilding and collective spirit. I am pretty sure that in 2018 another canoe event will follow. But next time it will be no CITO and I will choose a less smelly river, maybe Krka…

Back to this event. I arrived at the meeting place between Livada and the Canoe Club at around 12.30 because I had to paddle upstream to find a suitable hiding spot for the promised surprise. I was back just in time to greet Ančka who was the first geocacher to arrive. Shortly before 14.00, some other teams showed up and soon afterwards the parking space was filled with cars and enthusiastic CITO boatmen and boatwomen. Besides many well-known figures of the national geocaching scene, a young couple from the Czech Republic honoured the event with their presence. 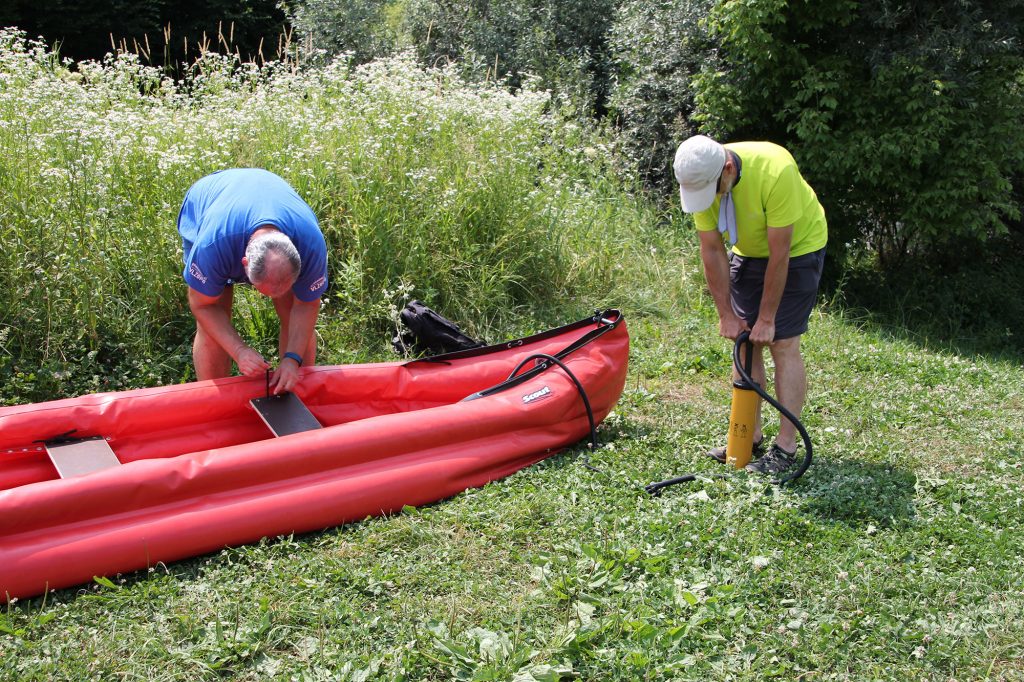 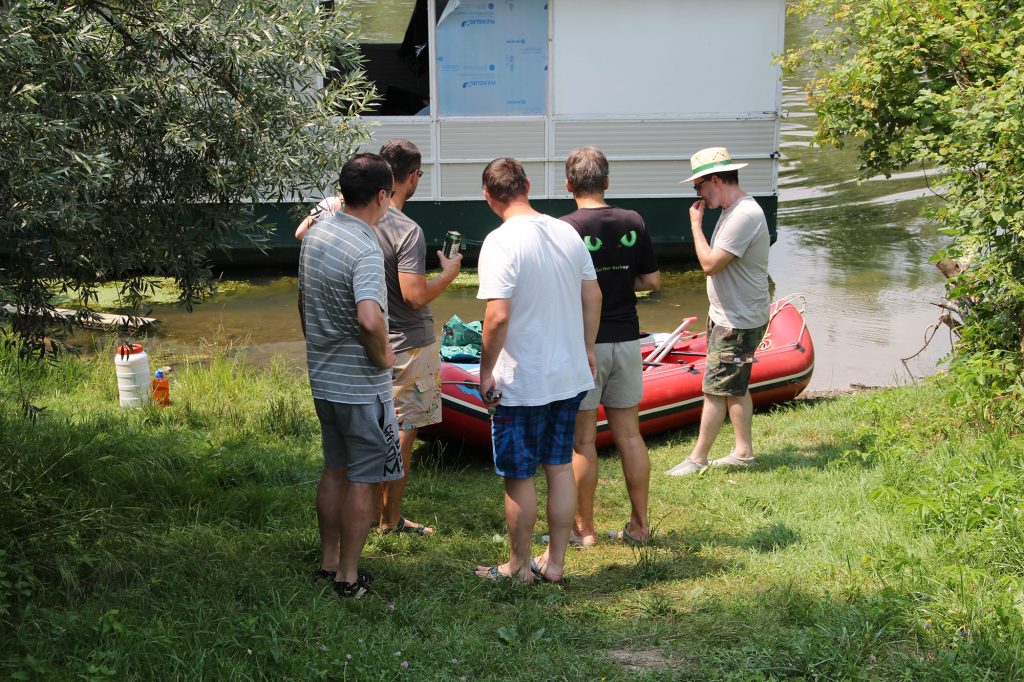 I must admit that I was a bit overwhelmed by a large number of attendees. A few hours before the event started only 8 teams had definitely confirmed their intention to take part, and suddenly more than 20 teams showed up. I really had not expected that so many geocachers would want to paddle the muddy and smelly waters of the Ljubljanica during the biggest heat of the day. 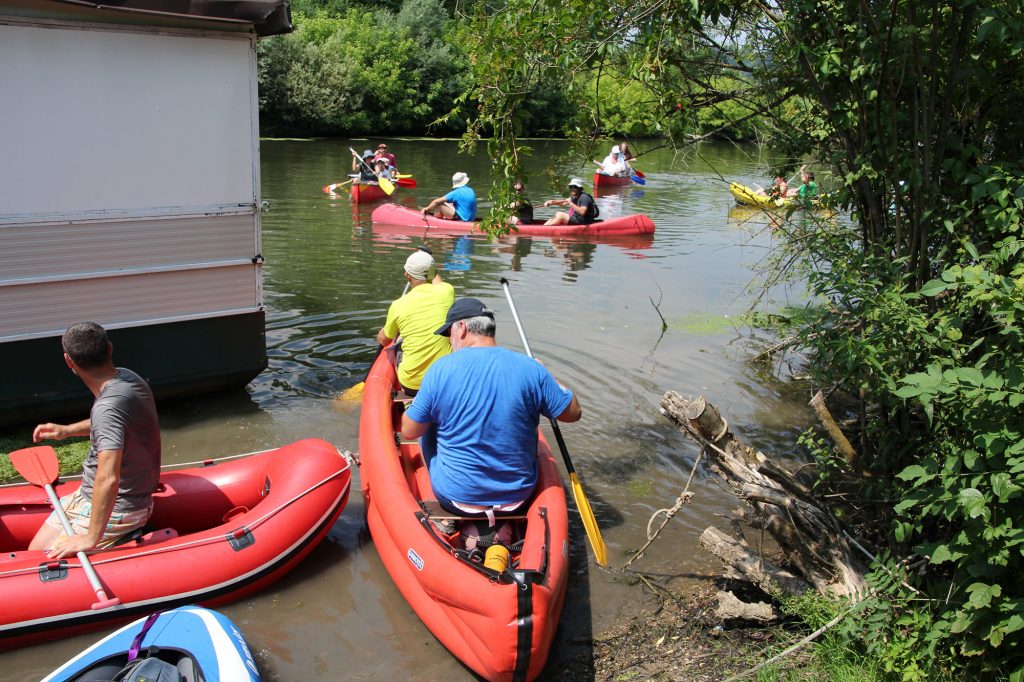 After all the teams had prepared their water vessels (and the first beer cans had been emptied…), we set sails in the direction of Črna vas. But we did not get really far, because just 150 meters from our starting point the first geocache of AleksSi’s miniseries Ljubljanica I-III had to be found. I had already done so a couple of days ago, so I could watch the searching frenzy from a safe distance and take a few pictures. 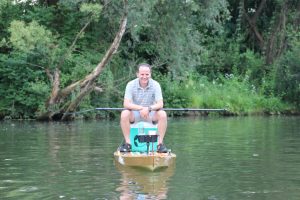 Cache owner supervises the searching efforts on his strange vessel 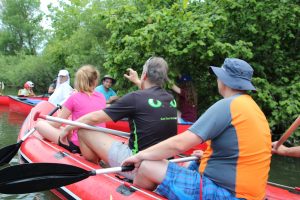 Soooo little…. One micro hanging from a bush can cause a huge traffic jam

Now it was time to give the CITO river pirates instructions on where to search for the two treasures that I had prepared for the purpose of this event. So I handed the (water-repellent) treasure map to the »sailors« sitting in one of the faster boats. All other boats followed this »mothership«, and soon afterwards both treasures were lifted. One was a big waterproof bag filled with beer, radler, soft drinks for the youngest participants, some energy bars, and, last but not least, the event logbook.

I had hidden it an hour before the event started and thanks to the shady hiding place near the shore and the added cooling elements, the drinks were still cold enough to offer at least a little bit of refreshment. Had I known before that more than 20 teams would show up, I would have bought a lot more drinks. This way it was more like one beer a boat. Sorry guys, but this is what happens if you do not register for an event… 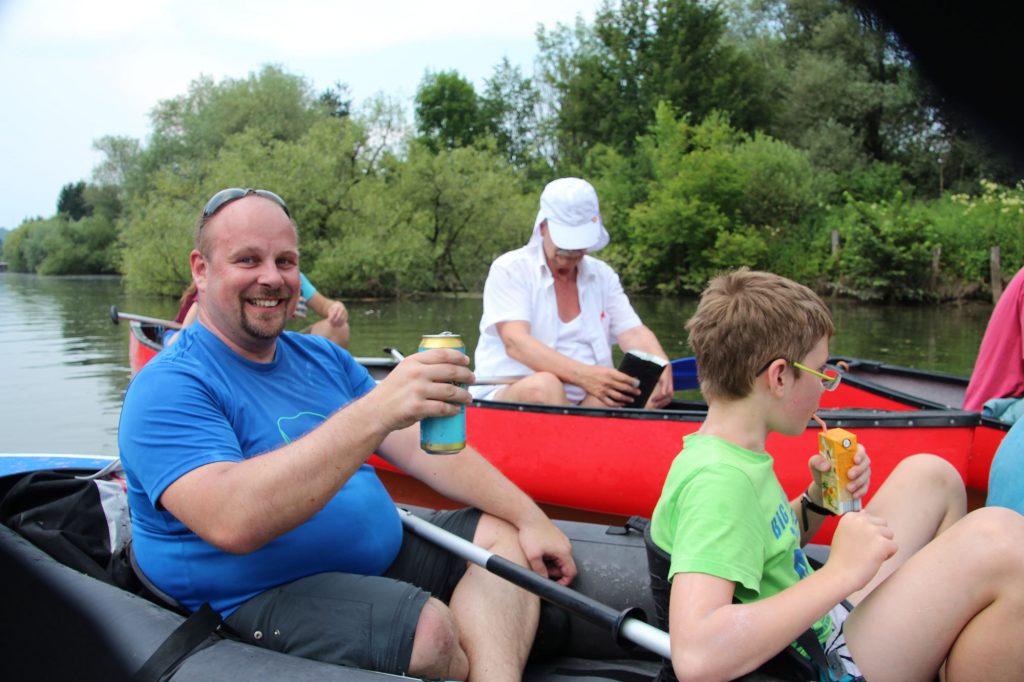 Na zdravje – one beer a boat

The second surprise was the new (at that time still unpublished) geocache Anas platyrhynchos that I had hidden a few days ago during my last paddling trip on the Ljubljanica. Thanks to my amateurishly drawn (but obviously good enough) treasure map the »sailors« of the »mothership« found it immediately. Unfortunately, most of the other geocachers had not taken any notice of the new cache or did not bother to take a look how and where it is hidden. I guess some only realised that they had paddled by a new geocache when it was published two hours later.

By the way, thanks a lot to our accurate reviewer Nikrmana who reviewed the cache in a very short period of time and published it (like I had asked him to do) at 17.00 sharp. At that time most of the team members were sitting on the outside terrace of the restaurant Livada enjoying some well-deserved cold local craft beer. 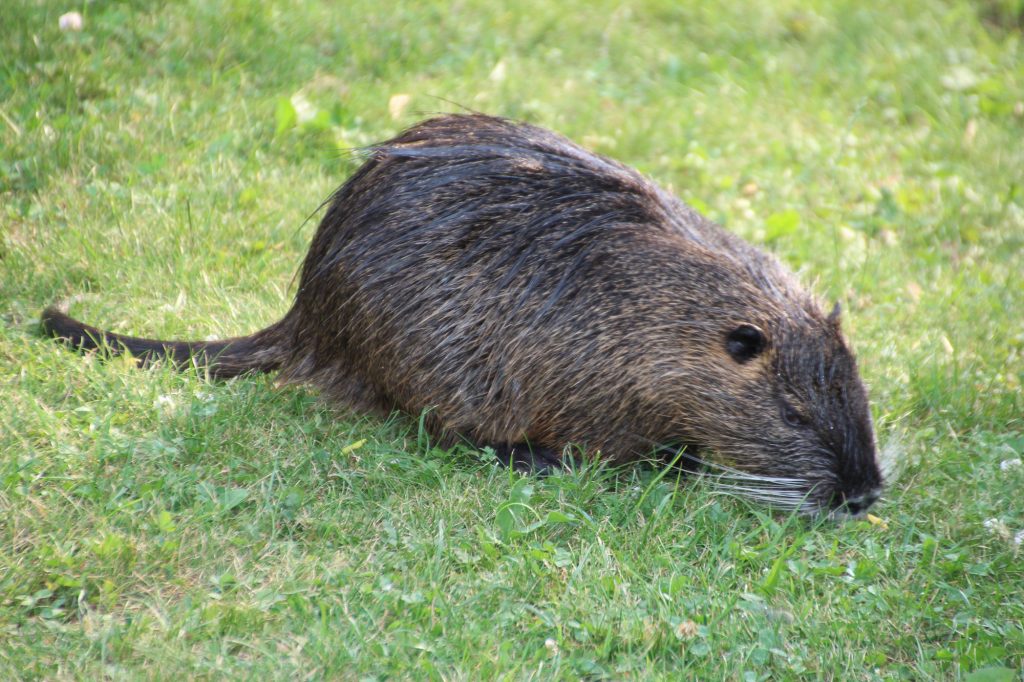 Coypu / Nutria joins the after party near Livada

In my opinion, it would have been a very mean and antisocial strategy to keep the new cache a secret and wait for it to be published after the event. Of course, it would have been interesting to see who is prepared to leave the after-party and swap a yummie beer for a FTF on the muddy waters of the Ljubljanica. I am a hundred percent sure that some teams would have left immediately to take all the paddling stuff out of their car again…

But since the new cache was already (mass)logged, nobody felt the urge to jump back in his/her canoe and we could focus our conversations on other geocaching topics than hunting for FTFs.

Thanks again to all the river pirates from near and far for taking part in my first CITO and for your pleasant company! Hope to see you again soon! Happy holidays and many unforgettable geocaching moments in Slovenia and/or abroad to all of you!